What deals are available on Provi?

Everything there is to know about redeeming deals on Provi.

The short answer: any deal can be redeemed in your Provi order!

However: even if the deal isn’t shown on Provi, if your distributor is running a deal and your order qualifies, your rep will still redeem the deal for you, even though your cart estimated price total won’t reflect the deal price.

How do I know if there’s a deal on a product?

Both types of deals are shown in Provi with a deal icon in the upper left corner. When you open the product’s description page, you’ll see more details about the deal.

How do I redeem a quantity deal?

The Deals tab of an eligible product’s description page explains how much you will save, as well as the minimum quantity you need to purchase in order to qualify for the deal. Some deals can only be redeemed on specific size or packaging options, listed on the Deals tab.

Your cart also shows you:

How do I redeem a mix deal?

Mix deals (also known as “Assortment” or “Mix & Match”) allow you to combine any qualifying products to your order and receive a discount.

If the product you are looking at is eligible for a Mix deal, the Deals tab of an eligible product's description page will specify what product sizes and packaging options are eligible for the deal, as well as the dollar amount off per unit. 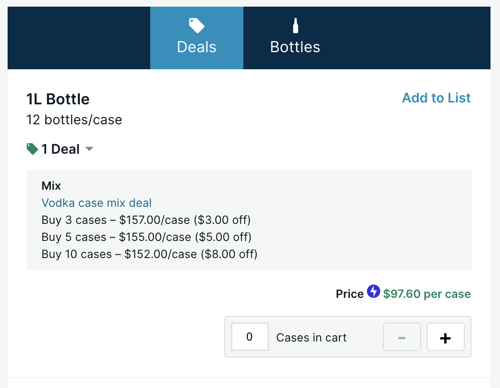 You can click on the deal name (identified under “Mix”) to see every product included in the deal and shop directly from that list. This new page also shows you your current discount and if a greater discount is available.

Similarly, your cart will also display your Mix deals redeemed, total savings so far, and any additionally available tiers of deals. If you decide to add more qualifying items before submitting your order, you can always click into the deal name to shop from all products included in the deal.

What happens when a product is eligible for multiple deals?

In this lucky case, all deals will be shown on the product’s Deals tab and in your cart. Your distributor sales rep will provide final pricing and determine which deals can be applied to your invoice. Contact your distributor rep if you have any questions.

We’re always expanding the number of distributors we are partnered with. We add more deals to Provi every month! However, don’t forget - just because a deal isn’t shown on the product doesn’t mean you won’t be able to redeem it. If your distributor has advertised a deal elsewhere, you can redeem that deal on Provi as well.

Can I add deals to Provi?

Although you don’t need to document an unlisted deal in order to redeem it, you can always add deal notes to your order for your own record keeping.